By: Peter Nestler
In: Uncategorized 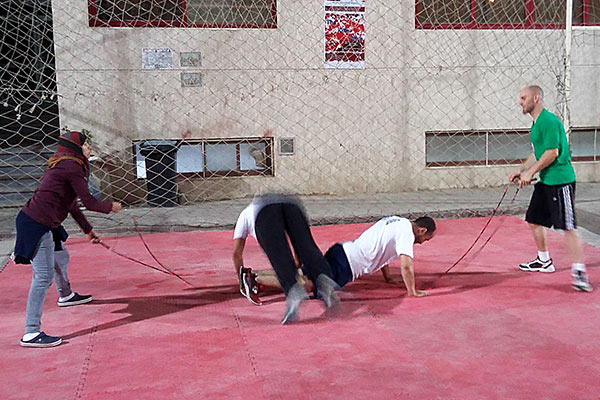 I am finally back in the states after a whirlwind trip to Suhag and Cairo Egypt. Alicia and I had a great time visiting some friends we made last time as well as meeting many new people (and of course putting on many jump rope shows and workshops). We started off on a bit of a sour note when our Delta flight had a broken radar and we were stuck sitting in the airport for many hours waiting on another plane to get us to Atlanta. When we finally landed at 2am in Atlanta, we had obviously missed our connection and were put on a different flight 16 hours later. I fly over 150K miles per year on Delta and this year has been ridiculous with mechanical delays and hopefully they start getting their maintenance figured out…I digress. Anyway, when we finally made it to Cairo we really didn’t have any downtime.

We got a few hours of sleep at a hotel near the airport before getting picked up for the 7 hour drive to Suhag. I would love to say that it was a gorgeous drive through beautiful countryside, but it was 7 hours driving through a desert. Definitely beautiful in it’s own way, but quite monotonous when you are driving in the middle of the day and it’s 100+ degrees outside. My first show of the trip was scheduled for 5pm that day so we only had time to stop for fuel (and the occasional toll booth + speed trap). I wasn’t quite sure what we were walking into for our show, but I knew that we would make it work.

The jump rope shows we were putting on were outside, but thankfully the timing had the sun just going down behind the massive backdrop that was setup. It was hot, but certainly bearable. I always find it interesting when I have an interpreter that is trying to follow along with what I’m saying. I normally talk rather briskly and highlight the jump rope skills (or unicycle tricks) as I’m doing them. Both guys that were interpreting for me had quite a workout as I zipped around the stage performing different styles of jump rope tricks and using words they had never heard of before. I did wonder at one point how often they use the term “Double Dutch” in Arabic (amongst other terms). After a little bit of trial and error, we finally got a rhythm down and the rest of the jump rope show went awesome! There were about 2,500 people there at each live show I did.

So the way they set things up at the festival was for me to do a 30 minute jump rope show and then a 10 minute version for their tv program. The festival streamed the program at 6pm and there were a number of things going on during the tv event. I was told that 100K+ people would be watching each night on top of the 2.5K we had at the event. The only challenge was they wanted me to do different stuff during the tv programs so there was no repeating, but I also had to not repeat anything that I did during the 30 minute shows so the live crowd saw something new each time. It took a bit of a think to change my jump rope routines around enough so they always saw something new. In the end, it was a great series of programs and we had a lot of fun. Since we were far away from any sort of large city or tourist destination, my jump rope show was one of the biggest live shows most of the people had ever seen. It was pretty cool….except for the onslaught of picture (or more accurately ‘selfie’) requests. Thankfully we had some security that got us in our van and out of the way.

We spent 2 nights sleeping on a docked river boat (Alicia and I totally got to sleep on the Nile). We then had a nice long drive back up to Cairo where we would spend the rest of the trip teaching jump rope workshops to Hot Floor Academy. HFA is the same group that I taught some jump rope skills to last time I was in Egypt and they were very excited to have even more time to learn from us. Since each day was hitting over 100 degrees, we decided to take it easy during the day and started our workshop after the sun went down. It turns out Egyptians would definitely qualify as “Night Owls”. In fact, we were told that morning doesn’t really start until 10 or 11am. I told someone that I normally workout at 6am and they thought I stayed up all night and worked out before going to bed.

I’m not much of a night time person, but they sure pushed our limits on that one. We started each jump rope training session around 7pm and went until 11 or 12. We would then head back to the house where they would start cooking dinner. The food was amazing, but Alicia would have to wake me up so I could eat dinner at 12:30 or 1. All part of the fun.

Just like last time, it was another great trip and we can’t wait to go back in November! I’ve posted a couple pictures from the workshops and show. The stage show in Suhag had a fan setup on the side so there would be some airflow since it was quite warm outside!

Peter Nestler performed his "Rope Master" assembly for our 260 kindergarten through fifth grade students recently and I would like to give his show my highest possible recommendation. In my 22 years as an elementary principal, Peter's assembly was one of the best if not the very best assembly we have ever had. Our kids were completely entertained and interested in his presentation. He is a great performer and connects extremely well with his audience. Beyond the entertainment value, his message of working hard at something to excel at it resonated with the audience. We would definitely have Peter back again.